Welcome to the Pulse, the newsletter that provides club news and information of interest to our battery-operated members.  In this edition, you will meet a beloved member, get sound advice from a well-respected member, learn how you can participate in the Year of Recipient Friendships and read other helpful information.

-----------------------   The spirit of our website is active members who are willing to share their experiences and knowledge with others.  Pacemaker Club is pleased to introduce one such veteran member who has been helping fellow recipients on our site for a number of years.  Thanks to our beloved Smitty! 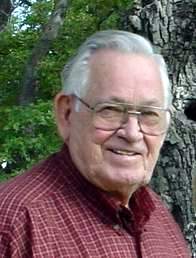 Do you have a pacemaker or ICD?
Pacemaker.

What is the model?
Medtronic Versa.

When was your first device implanted?
September 2000. My second was implanted in October 2009.

How long have you been a member of Pacemaker Club?
Over five years.

Why do you stay active on the site?
Since I have the time I like to pass on any knowledge about pacemakers that I have acquired from other members of the Pacemaker Club and from my search for answers to some of the questions.  I see myself in many of the questions posted here as  I had many problems with my first pacemaker and I had no place to get answers until I found this site.  The doctors and technicians would say only that your pacemaker is working fine and is not causing your problem.  Here, I found answers to many of my questions.

Why do you enjoy Pacemaker Club?
I find the Club informative and entertaining.  In addition, it has opened the door to new friendships that I enjoy very much.

Where do you live?
Salado, Texas.

Are you married and do you have children?
I’ve been married for 62 years and I have three sons.

What advice would you give a new recipient?
If you have an on demand pacemaker, which is the type many of us have, do not let it rule your life.  A pacemaker is only a helper for the heart for most of us and should it quit this minute we would continue to live as our heart would simply return to functioning as it was before we got the pacemaker.  That means we can get help before anything drastic happens.  But we should always keep in mind that a pacemaker is nothing more than a helper for our heart and as such is not the only reason our heart continues to beat.

Why do you need a device?  Brief medical history?
My heart disease was diagnosed in 1982.  I had a heart attack followed by quadruple bypass surgery, pacemaker and four stents in that order.  I got my pacemaker for bradycardia, which I had known about for more than 15 years, but so far as I knew it was not a problem.

What is the best thing that happened to you since getting a device?
The best things that have happened to me since getting my device are I’m still alive and I found the Pacemaker Club.  I have health problems, other than heart disease, that limit my activity.  Participating in the discussions on the Pacemaker Club have kept me busy for many pleasant hours.  For that I am truly thankful.

2012 - The Year of Recipient Friendships
By Blake Hunter (Username: admin)

In lieu of organizing an official social in challenging economic times, Pacemaker Club has officially declared 2012 to be the the Year of Recipient Friendships.

"I have made so many rewarding friendships, just like so many other members, since starting Pacemaker Club 12 years ago.  Most of my friendships with other recipients are online, but there is something special about meeting a fellow recipient face-to-face and sharing stories. I’ve been blessed with a few such occassions in recent years"

In 2012, Pacemaker Club encourages you to meet fellow recipients in your part of the world, take some photos or a video and share your story with us.  To learn how to participate, email us.

Let’s explore some of the pacemaker settings we commonly read about in our forums. My terminology is meant to be descriptive rather than the exact name used by the manufacturers.
Lower Rate Limit
The pacemaker will not allow the ventricular rate to go below this value. The main issue here is to set this limit high enough to avoid fatigue, light headedness, or passing out especially when the person is inactive. It also needs to be set low enough not to interfere with sleep.

Upper Tracking Limit
This setting limits the maximum atrial rate that will be passed on to the ventricles by the pacemaker. It does this by sensing the interval between atrial contractions and skipping any that fall too close to the previous one. This result is that the heartbeat becomes irregular and uncomfortable if pushed above this limit. Also, keep in mind that the pacemaker can’t stop a nerve impulse that makes it through the AV Nerve Bundle as happens intermittently in some types of heart block. So, it is possible to have a heart rate that is higher than the Upper Tracking Limit.

With Rate Response active (ON) there is another group of settings such as Upper Sensor Rate, ADL Rate, etc. that control the action of the Rate response. If Rate Response is not active these settings will be seen on the interrogation report, but will have no effect.

Keep in mind that I look at all this from the perspective of an engineer, rather than a doctor. Actually, engineers design pacemakers, which makes it easier for me to understand. Most of my information comes from reading the manufacturers technical manuals, and my experience with my own pacemaker. 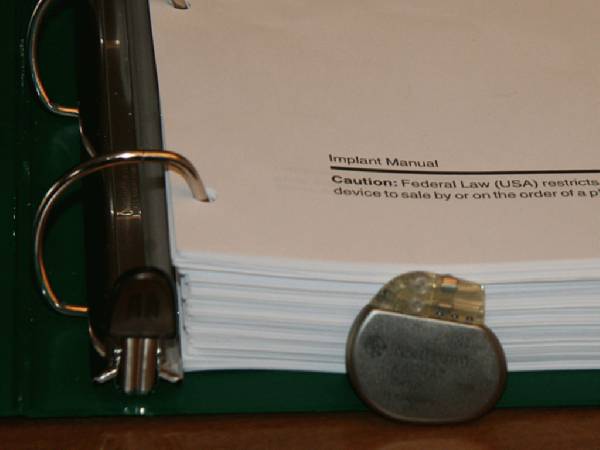 So, here are some of my thoughts.

Rate Response should not be used unless there is a well-confirmed diagnosis of a sinus node problem. In my case I was diagnosed with Sick Sinus Syndrome even though my ECG showed a normal sinus rhythm that responded to exercise appropriately. This resulted in competition between the pacemaker and my heart, causing some strange arrhythmias. It was near the end of my first year with the pacemaker that I discovered this and insisted on having Rate Response turned off. What a relief.

If Rate Response is used the adjustments that affect it should be set to match the persons physical condition and activity. The manufacturers representative should make the settings during actual exercise. The Medtronic Programming Computer has a program for doing this on a treadmill.

There is a tendency of doctors to set the Lower Rate Limit too high in athletic patients with AV Block. It is understandable because the doctor has no way to know what the persons resting heart rate was before the block occurred. Again, looking at my own situation, my resting heart rate before the block was around 58 bpm. My lower limit was set to 70, making real relaxation difficult with a racing heart. At my insistence, it was set down to 60 (an improvement), and finally set at 55. I was warned that I would experience fatigue at that setting but it never happened. My resting heart rate returned to its usual 58 bpm, and the lower limit was never reached.

Getting a handle on the Upper Tracking Rate is a bit more difficult. This setting is intended to provide a way to prevent atrial tachycardias from being sent on to the ventricles and causing vtach. In this case, it provides a useful service. The problem occurs with healthy, fit patients who are very active and have developed one of the blocks. At implant the upper limit is set to an excessively low value based on age with the idea of keeping heart rate low and safe. Before my AV Block occurred at 74 years I had no problem briskly walking and maintaining a heart rate of 140 bpm. At implant the default values were based on my age and inferred condition. So my upper limit was set to 120 bpm. Even a gentle walk into one of our desert winds would drive my heart rate above the 120 limit causing all sorts of strange beats. At my insistence they raised my upper limit to 140, and then at the next session to 150. Now I could exercise again. I want to emphasis though that I used a monitor and kept my heart rate to a maximum of 140 during exercise. The 150 setting gave me some room for the overshoot that occurs when I stop.

Keep in mind that these are suggestions that can be modified by other cardiac conditions you may have. My suggestions aren’t prescriptions, but rather things for you to explore with your doctor if you are experiencing problems.  The technical manual for my pacemaker contains 350 pages of information concerning proper programming of the device. Most of the language is more electronic than medical so if needed don’t be affraid to explore with your doctor what settings are best for you.

All members can purchase a Power Pack of our most popular merchandise for just $25.95, save over 15%, receive a free membership card and support the club. Our Power Pack includes our You’re Pacing When book, pacemaker-shaped keychain, identification card holder and welcome letter.  Shop at pacemakerclub/store

Here’s a photo of some of my old pacemakers.  The thickest/biggest one is my Medtronic from 1964.  The other two are probably from the early and late 1970’s.   I can’t remember exactly when I got them ... I just know they got me A’s in many school projects. 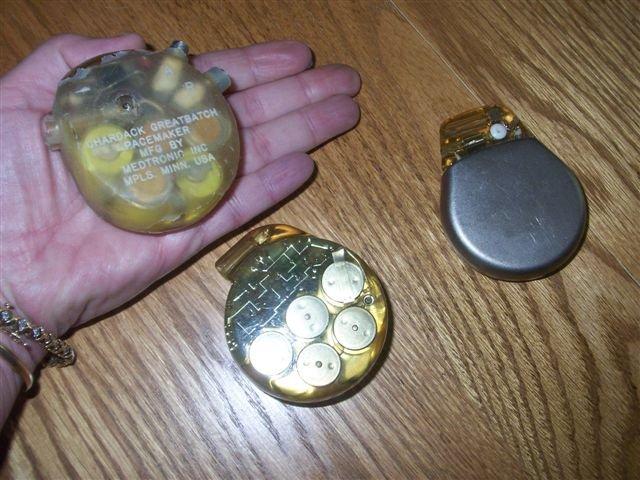 Are you a Facebook user?  If so, check out the Pacemaker Club Fan Page at www.facebook.com/PacemakerClub  Don’t forget to indicate you LIKE the page.

Our Facebook page provides members with another channel to follow the latest news from Pacemaker Club.  Our intention is not to reduce the activity on our website, but to promote our online community.

Your old device becomes a paper weight for your desk.

As for my pacemaker (almost 7 years old) I like to think of it in the terms of the old Timex commercial - takes a licking and keeps on ticking.